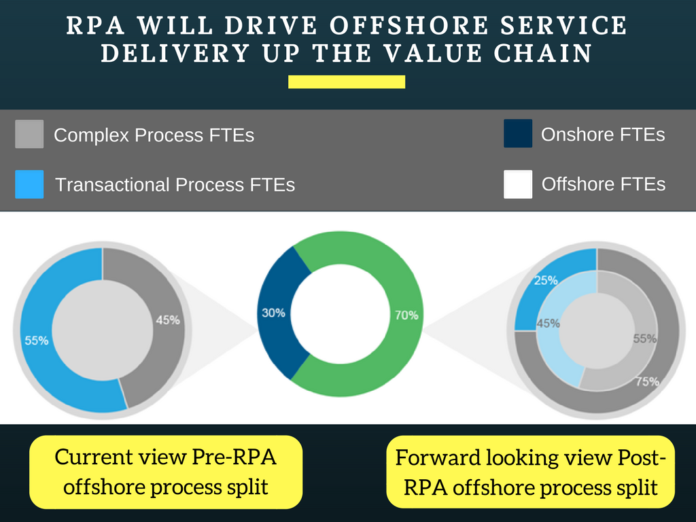 The new introduction of H1B visas reform bill in the US House of representatives has sent Indian IT companies into tailspin. New bill proposes to double the minimum salary of H-1B visa holders to USD 130,000 which will make it difficult for American firms to replace local employees with foreign workers. With currently 300,000 Indian engineers in US on H-1B visas in US, Indian IT companies such as Infosys and TCS are going to get impacted by about $2.5 Bn in incremental cost. (Source:Moneycontrol)

However, the amount of impact of RPA – Robotic Process Automation is going to be bigger on Indian IT outsourcing industry.  RPA is “robotic” software that can mimic human processes within the organization and once trained can perform the actions of existing applications used in the organization. It can automate transactions, data transfer and analysis, trigger next steps and communicate with other systems. This technology is designed to replace high-volume activities related to finance, supply chain, operations and even programming. (Source: Infoworld) RPA pilots have shown benefits with almost 40-80% reductions in processing times. RPA programmes are fairly successful in finance, insurance, healthcare and manufacturing industry. In finance industry, company such as Barclays is able to reduce 200 FTEs across operations using automation.  (Source: Accenture) 60% plus labor automation is already observed in IT infrastructure support jobs already. Most IT infrastructure support jobs will be eliminated over the next three years as per Frank Casale, founder, Institute for Robotic Process Automation.

Some of the things mentioned about RPA by organizations and consulting companies:

“Almost any type of computer-related process which is rules-based [and] which a human performs today could be affected at some point in its lifecycle, where [RPA] could mimic what a human does,” Gartner’s Tornbohm says.

“Our goal with RPA is to be able to take on additional work without the need to add staff.” A.J. Hanna, senior director of operations support, Ascension Health.  Ascension Health deployed RPA system from Blue Prism in 2014.

“It hasn’t necessarily been about cost reduction, but more about better service and improving the effectiveness of our people.” — Danny Wootton, innovation director, CGI.  IT services provider, CGI worked with three RPA providers for process automation.

Sutherland is one of the leading contact center players and has strategically focused on RPA and marketed it in non-voice BPS space. It has developed relationship with RPA technology provider such as Blue Prism. Sutherland won a contract from European travel company as it was a RPA led BPO deal.

Genfour was founded in 2012 and offered robotics as a service, on a cloud based infrastructure on demand. Genfour is already established and has clients such as NHS Scotland, IFDC, Coral and RAC.

Celaton uses advanced algorithm to handle unstructured content that is received from customers, suppliers and other sources and provides intelligent responses to it. It already has clients such as Virgin Trains, Zenith Hygiene and Kuoni.

Automation anywhere is the leader in RPA and has much bigger clients such as ANZ and Latam Airlines. It offers cognitive RPA that can automate any process in the enterprise. IT automation includes IT process automation, web data extraction, data transfer automation and ERP system automation. The global robotic automation market will reach $5 billion by 2020 and is forecasted to grow at 60% CAGR through 2020. As per an analysis by McKinsey & Company, the opportunity of automation of knowledge work stands at $5-7 trillion. More than 40 organizations have selected Accenture and Blue Prism to automate business processes to reduce cost and increase productivity. Accenture is planning to certify 600 professionals on automation technology to provide the consulting services to organizations.

“We had been considering RPA as a way to accelerate business results, but we needed a solution that could be housed internally, scale rapidly, and be up and running within two months,” said Markus Stanek, head of Group Efficiency of Raiffeisen Bank International. RPA can accomplish a task at 1/3rd the price of an offshore FTE. Plus, RPA can work 24/7/365 which increases productivity and is scalable to different geographies. Currently 25% of work done by offshore FTEs involves transactional processes which can be replaced by RPA. This clearly shows how offshore FTEs will be impacted by the adoption of RPA The current IT service and BPO industry in India employs 3.5 million professionals. India is set to lose 640,000 low-skilled positions by 2021 which take into account back office processing and IT support work. The loss of low-skilled jobs will be partially offset by growth in mid-high skilled jobs. Hfs predicts that there will be 14% decline in workforce in India.

Indian IT outsourcing industry needs to awake to the new threat of process automation via automated software robots. This rapidly advancing area of enterprise robots can replace FTEs with virtual FTEs and can transform business by enabling automation of manual, repetitive tasks.

“Over the next 10 years, the work of 110 million to 140 million knowledge workers around the globe may be handled by cognitive robotic process automation systems.” Cliff Justice, KPMG

“By 2025 there will be 200 million young people in the age group of 21-41 with no jobs or less jobs and no body knows what to do with these people. Government policy does not know what to do as they don’t have proper data,” Pai, who is the Chairman of Manipal Global Education Services, said.

This is a strong statement but it represents how technology can change organizations and require us to remain relevant in this age and adapt to the new technologies that will come in future.

What would be cloud computing trend in 2017?