The recent H-1B reform by President Trump has sent Indian IT Companies into a tailspin. If you have not already heard, the new bill proposes more than doubling the minimum base salary of H-1B visa holders to $130,000/Year, which would make it extremely expensive for American companies to replace local talent with foreign workers. There are currently an estimated 300,000+ Indian engineers in the US who are on H-1B visas. Industry veteran and Infosys co-founder, Narayana Murthy is suggesting (might I add, somewhat belatedly) that Indian IT companies should hire locals in the US rather than sending Indians on H-1B visas to deliver services.

This bill when passed, will undoubtedly have an impact on jobs, and costs.  But this business model of offshoring, and replacing with lower cost workers in a low cost location is a “legacy” business model. Technology companies, while advising clients to innovate and digitally transform, have done very little to disrupt, and innovate themselves.

What most companies fail to acknowledge is that ‘Robotic Process Automation’ or ‘RPA’ is a disruptive trend that will impact jobs and employment in the Technology sector much more than any H1B reform would. According to TechTarget, RPA is essentially the use of software, coupled with AI and machine learning to automate high-volume and repeatable tasks which previously required humans to perform. It can automate transaction processing, data transfer and analysis, trigger following steps in a workflow, communicate with other digital systems, and much more! We are already seeing this technology adopted in operations, finance, the supply chain, and even programming. 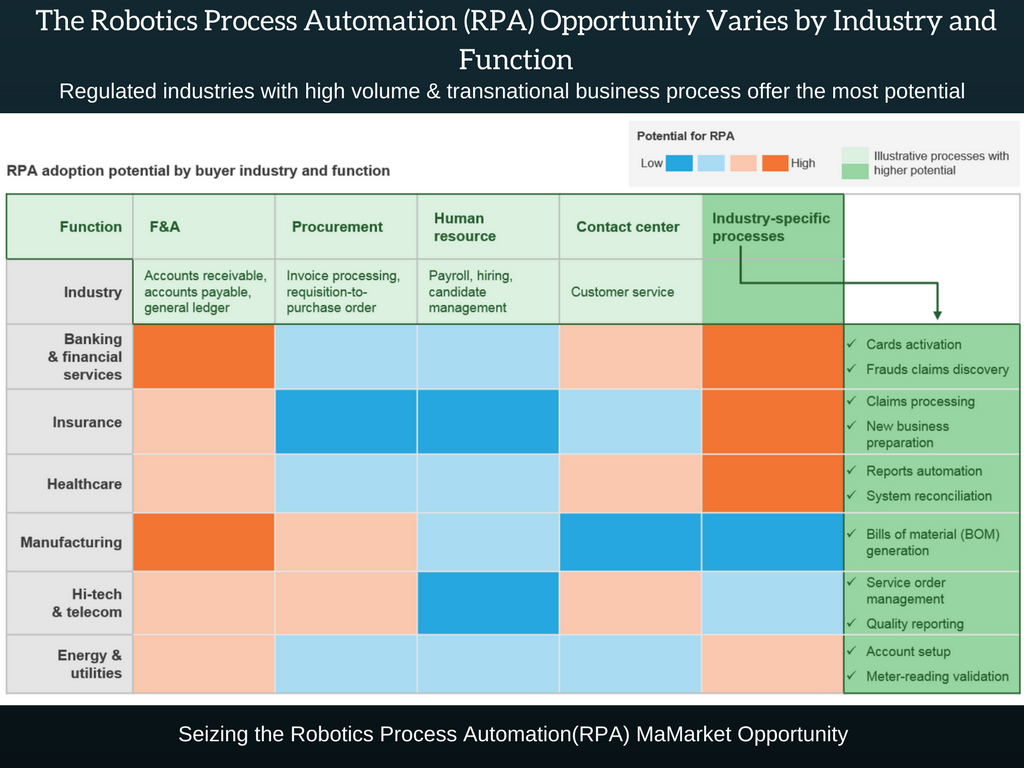 Pilots in RPA have already shown benefits with adopters witnessing a 40%-80% reduction in process times, increased quality & accuracy, and lower running costs. For example, in the Finance Industry, Barclays was able to reduce 200 full time employees across one of their functions using automation. There is already upwards of 60% automation in IT Infrastructure Support jobs and according to Frank Casale (Founder, Institute for Robotic Process Automation), many jobs will vanish over the next three years. 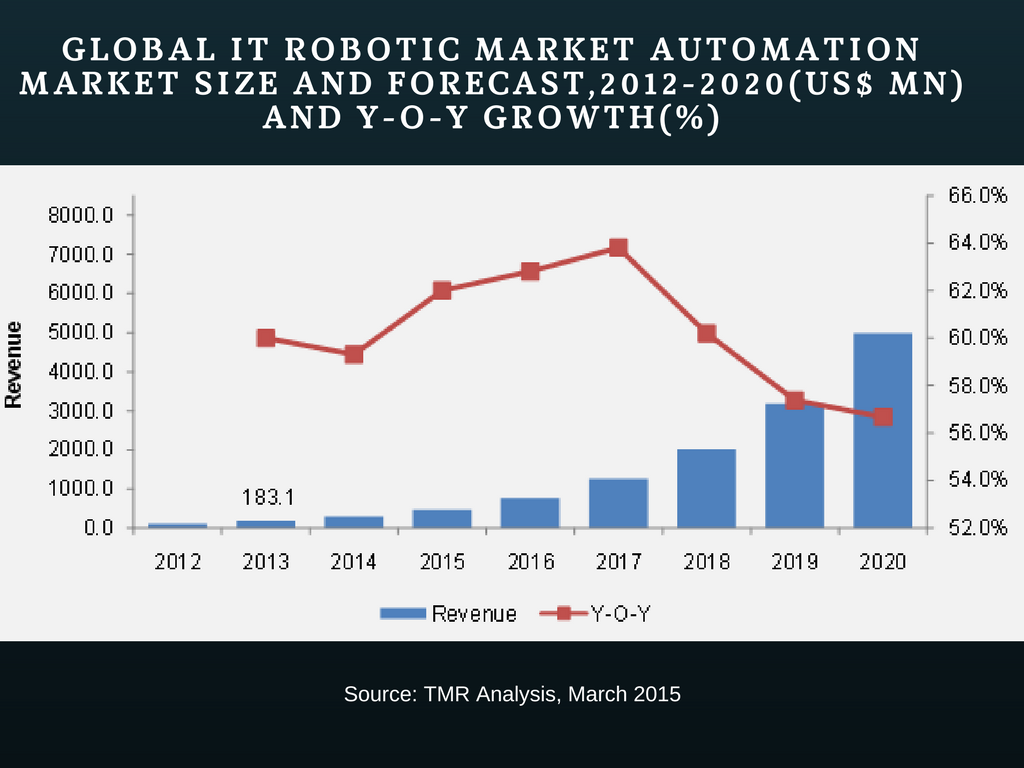 The global robotic automation market is expected to reach $4.98 Bn by 2020 with a forecasted CAGR of 60% from then onwards. Based on a McKinsey & Co. analysis, the opportunity in the automation of knowledge work stands at approximately $5-7 Trillion. Source: Roboticstomorrow

The Adoption of Robotics Process Automation 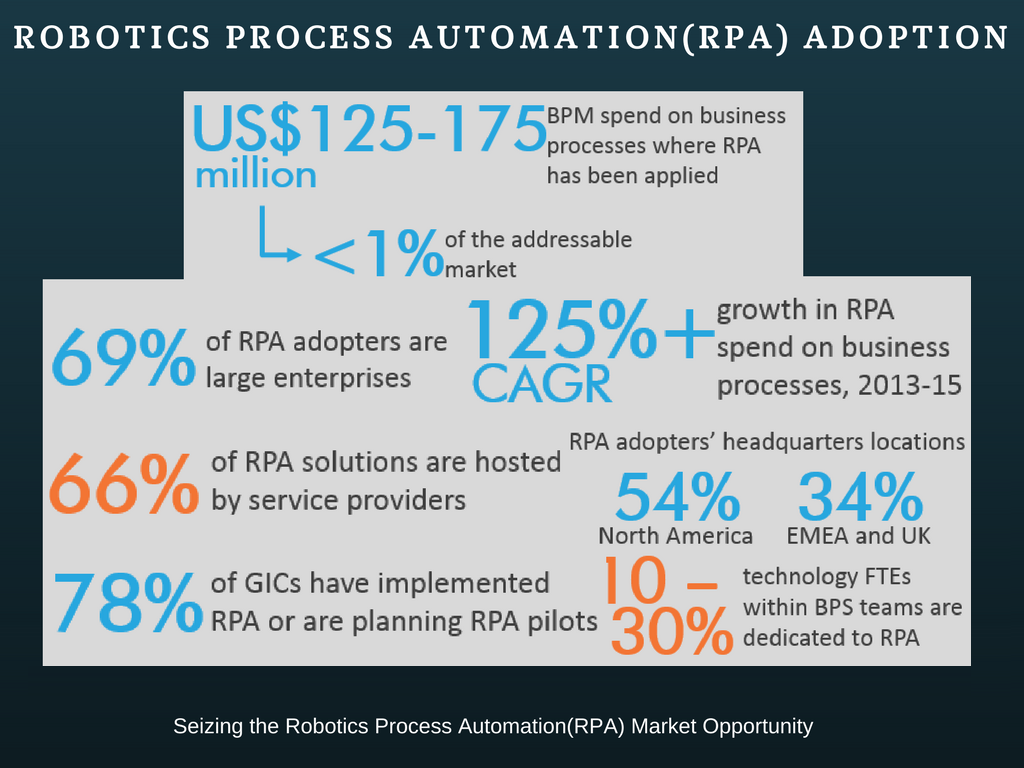 RPA’s revenue from the BPM sector is around 125-175 Million out of the global BPM revenues of USD 177 Billion.  The growth rate for RPA market in this space is at 100% CAGR for the last 2 years and is going  to impact 30-40%  of total BPM spend by 2025. The reason for the high level of adoption of RPA is the cost reduction of 35-65% for onshore operations and 10-30% cost reduction in offshore delivery.

RPA adoption is on the rise as organizations have more clarity in terms of applicability, credibility, and costs. While many are taking notice of this emerging technology, the BFSI, Telecom, and Healthcare Industries lead in implementation and usage of RPA. The commonality between these industries being large volumes of data and applications. This upward trend in adoption of RPA is not just exclusive to large organizations; due to it’s relative simplicity and cost-effectiveness, it is also being embraced by small and mid sized companies who are striving to reduce costs and increase operational efficiencies.

RPA represents a transformational opportunity for the BPO industry and we are witnessing the adoption of this technology in some of the largest companies around the world such as Capgemini, Accenture, Infosys, Wipro, and IBM. Industry sources cite that 90% of service providers are looking to invest in RPA, and many of them have already begun partnering with the major vendors. The increased attention to RPA comes in the wake of shrinking margins for the service provider where there is significant pressure on them to deliver incremental savings to customers while maintaining profitability.

Organizations such as EXL and Infosys are using their own automation tools to create efficiencies internally and for their customers. Steria and Genpact have partnered with Blue Prism and Automic. Nearly 40 organizations have selected a Accenture and Blue Prism combination to automate existing processes and reduce costs. Accenture plans to certify nearly 600 professionals in automation technology to deliver consulting services. 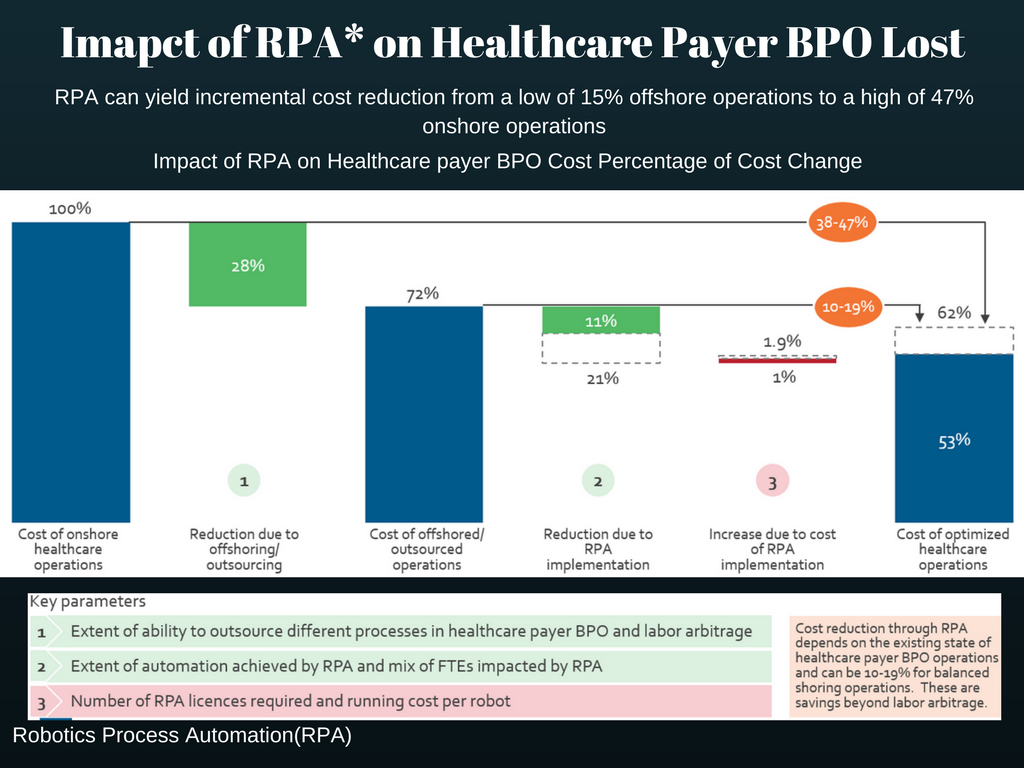 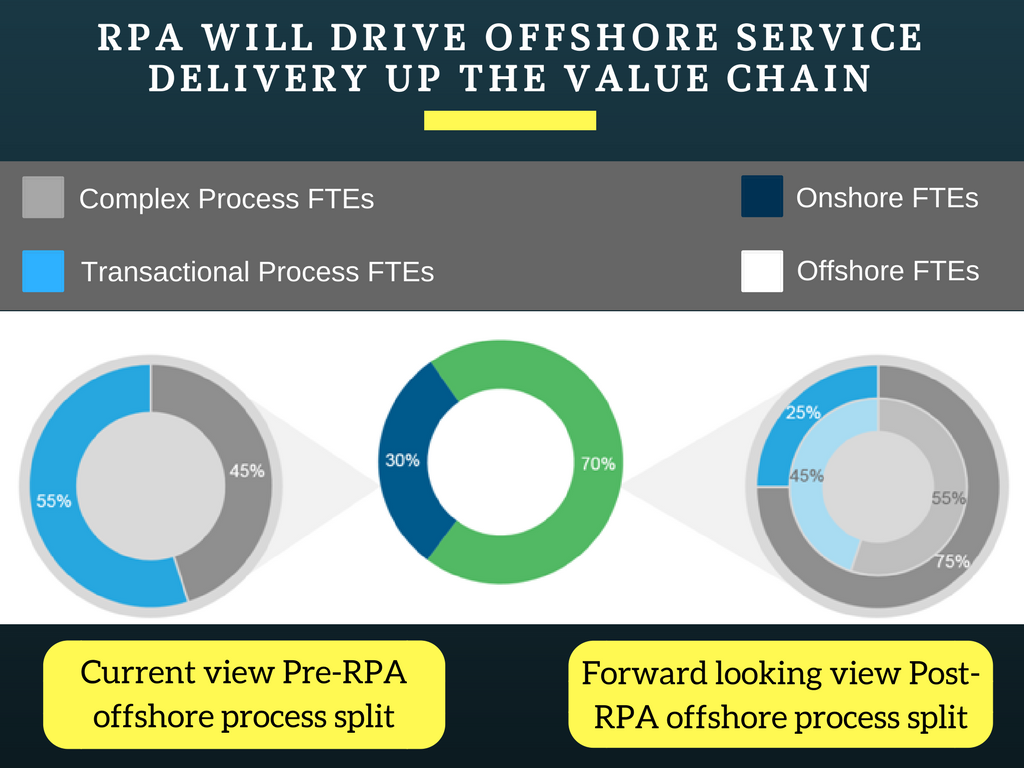 Through RPA, an organization can accomplish a given task at an estimated 1/3rd the price of an offshore FTE. Couple that cost benefit with the fact that RPA works 24/7/365, we have a real game changer. According to experts, approximately 25% of the work done by offshore FTEs are transactional processes which can be replaced entirely through the adoption of RPA. This clearly highlights the impact RPA will have in the coming future.

Our goal with RPA is to be able to take on additional work without the need to add staff.” –

Impact of RPA on IT/BPO Services Jobs in India 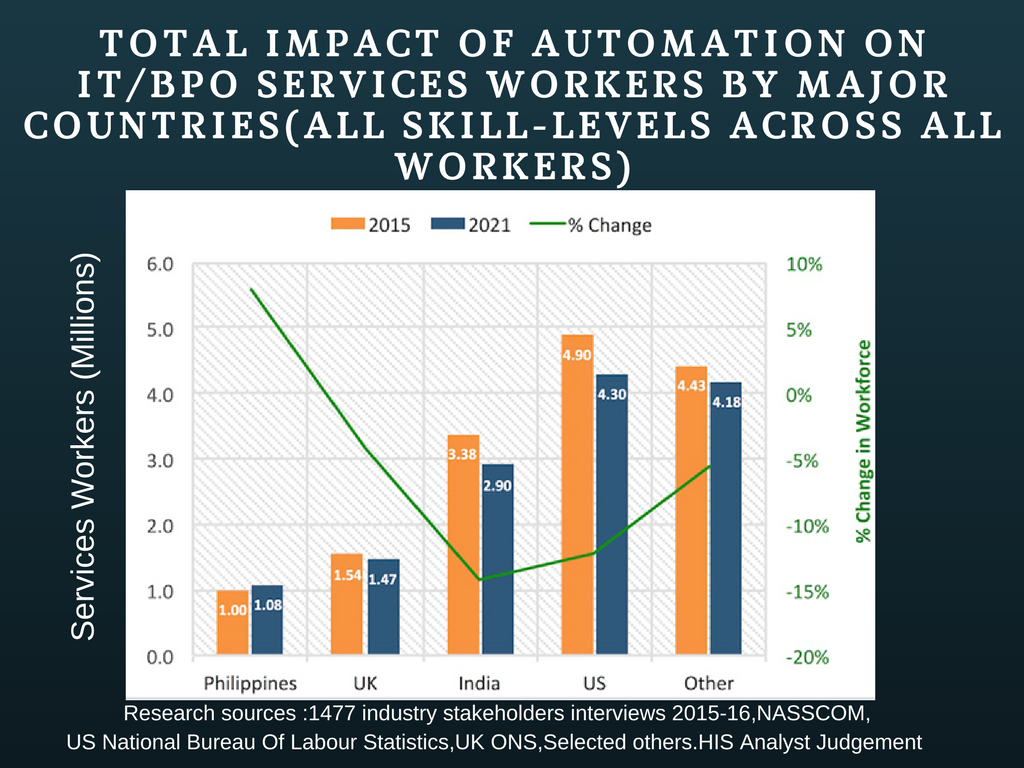 The Indian IT services industry will witness the largest impact with a 14% decline in workforce! The current IT services and BPO industry in India employs 3.5 million professionals and is set to lose 640,000 low-skilled positions by 2021. This loss will be slightly offset by the growth in mid/high skilled jobs.

“By 2025 there will be 200 million young people in the age group of 21-41 with no jobs or less jobs and no body knows what to do with these people. Government policy does not know what to do as they don’t have proper data”

We also need to consider the broader implications of RPA on jobs and employment. RPA will replace a large number of FTEs across most industries by helping organizations to automate manual and repetitive tasks. Though many higher caliber jobs will be created, the world will still see a large number of current FTEs being replaced by virtual FTEs in the years to come.

“Over the next 10 years, the work of 110 million to 140 million knowledge workers around the globe may be handled by cognitive robotic process automation systems.”

Below we have compiled a list of the Top 10 RPA Technology companies. 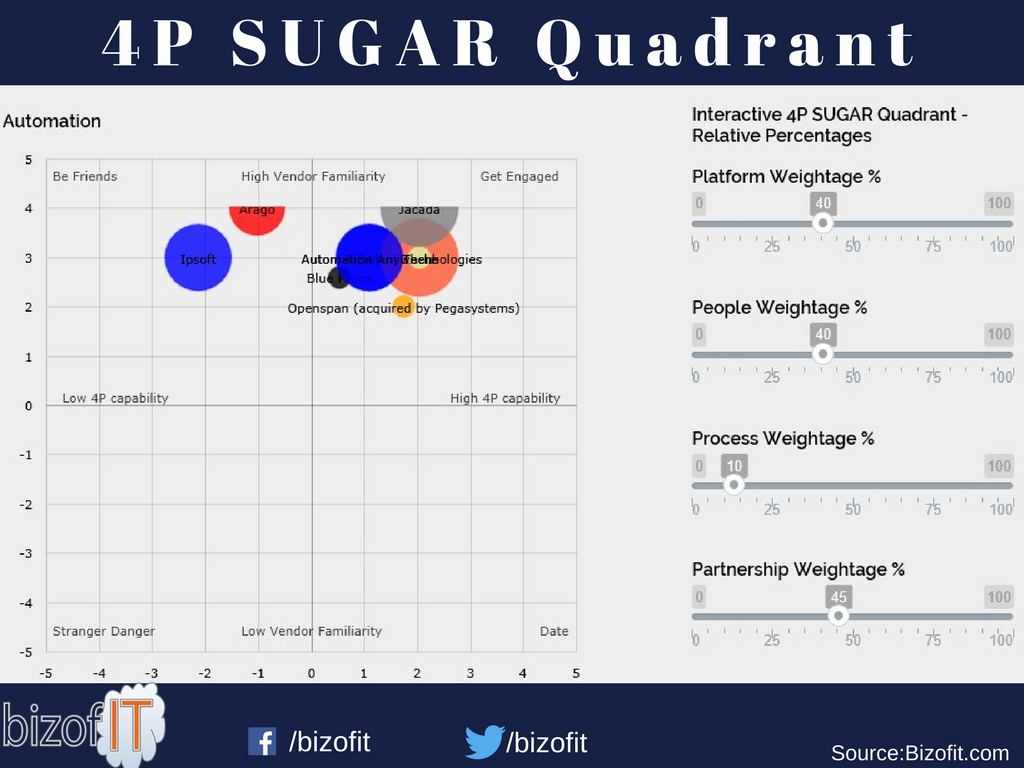 In summation, job creation and elimination will depend more on adoption of and growth in Robotic Process Automation, and not on H1B visa bills or regulations. The winners will be ones that embrace this trend, and make appropriate investments.

RPA – Robotic Process Automation – is the real threat to IT companies, not H1B visas

Impact of Immigration Reform on Indian IT Services

Demonetization – Brave and bold move by India to curb black...